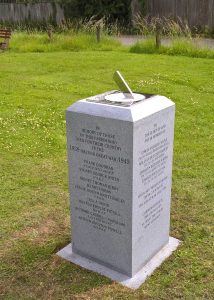 Last summer the Parish Council, in partnership with St Augustine’s Church, proposed a project to mark the centenary of the ending of World War one by placing a memorial on East Langdon village green.  The project took longer than expected to complete but on 26th June the granite memorial was finally installed.

The memorial records the people of the parish who lost their lives during the first or second world wars.  The 24 names have been taken from the memorial plaques in St Augustine’s Church, East Langdon and St Mary’s Church, West Langdon.  By displaying the names on the village green we hope that more people may pay their respects and take part in future Remembrance Sunday Services. On Sunday 28th July 2019 a Dedication Service was held to mark the final stage in the project.  Some 30 parishioners and several living relatives of those named on the memorial gathered share family memories and honour those who lost their lives during the First or Second World Wars.

More information about the names on the memorial can be found at
The Dover War Memorial Project or Roll of Honour websites.